An amateur prospector stumbled upon a rare 141-carat “parti-colored” sapphire in the Gemfields region of Queensland, Australia, last week, and the find is likely to make him at least $23,000 richer. The unusual stone — also known as “polychrome sapphire” — displays a range of colors, from rich blue to vivid green to bright yellow. 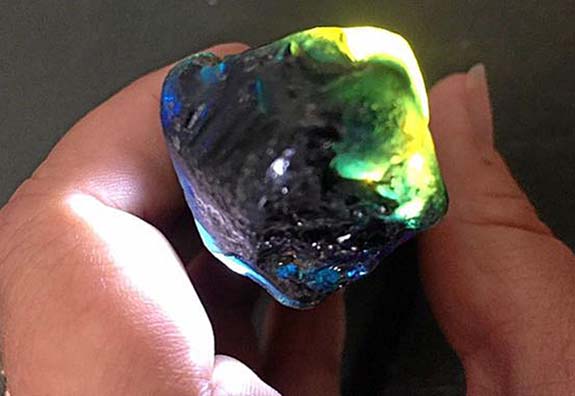 Australia had been a world leader in sapphire production for more than 100 years, with the industry peaking in the 1980s. Today, the Sapphire Gemfields have become a mecca for tourists looking for a little adventure and an opportunity to find a gemstone of their own.

Most of the commercial mining operations have closed down, but some of the once-rich territory is open to “hand fossicking.” Amateur prospectors have honed their “specking” skills, which is essentially walking through the bush with the eyes focused on the ground. What they’re looking for is any small change of color or a hint of sparkle, where the sun may catch the edge of a partly submerged, but often dusty, gem.

According to Grigg, the local resident, who wishes to remain anonymous, was wandering through the Reward fossicking area, kicking over a few stones when, much to his surprise, he turned over the “find of a lifetime.”

“There had been considerable rain a week or so before, and there it was lying tantalizingly within reach on the surface of the ground,” Grigg wrote.

“Parti-colored” sapphires can display two or three distinctive colors, depending on the trace elements present when the crystal originally formed. The transition from one color to another in a gemstones is called “zoning.”

“I find it amazing that after 100-plus years of people scratching around in the ground at the Sapphire Gemfields, stones of this quality continually pop up,” Grigg added.

Tourists and amateur prospectors are more likely to visit the Gemfields during the cooler months from March through September.

“It is well worth the trip, because you never know your luck,” Grigg told the Gladstone Observer. “One thing, though, no one will ever find a sapphire sitting on their couch at home.”