Harnessing the power of a half-mile-long particle accelerator, scientists at the Los Alamos National Laboratory were finally able to peer inside the “Ram’s Horn,” a super-rare and natural formation of wire gold. What they found was truly unexpected. 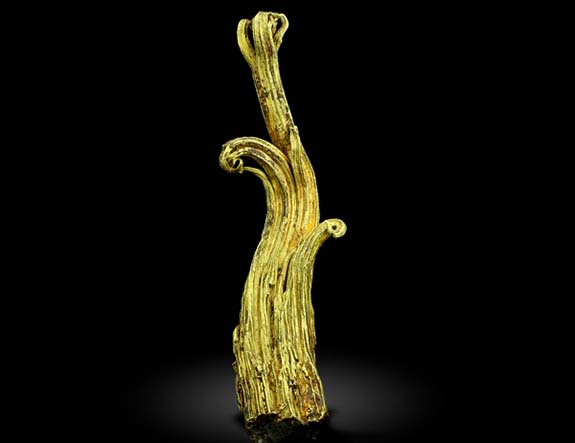 Unearthed more than 130 years ago at the Ground Hog Mine in Red Cliff, Colo., the Ram’s Horn is mysteriously shaped like a curly bunch of tendrils instead of the more recognizable golden nugget.

Mineralogists scratched their heads, wondering about its fundamental structure. The specimen is 12 centimeters (4.72 inches) tall and weighs 263 grams (9.28 ounces), but because of its extreme rarity, researchers didn’t want to cut into it or break it open.

Low-energy X-rays and other diagnostics could only evaluate the exterior surfaces due to gold’s high density. The internal nature of this specimen remained a mystery, until now.

Surprisingly, the Ram’s Horn was found to be composed of only a few single crystals, according to John Rakovan, Professor of Mineralogy at Miami University in Ohio. This differs wildly from the formation of silver wire, which is a mosaic-like polycrystalline aggregate with many hundreds to thousands of crystals in a single wire.

“Furthermore, we discovered that these samples are not pure gold, but rather gold-silver alloys with as much as 30 percent silver substituting for gold in the atomic structure,” noted Sven Vogel, a physicist at Los Alamos National Laboratory’s neutron science center (LANSCE).

Using neutron techniques at LANSCE, scientists can “look” inside these large gold specimens, nondestructively, and learn about their texture, atomic structure, and element and isotope chemistry.

The Ram’s Horn belongs to the collection of the Mineralogical and Geological Museum at Harvard University. It had been bequeathed to Harvard in 1947 by Harvard alumnus Albert C. Burrage as part of the A. C. Burrage Collection.

The fascinating gold specimen will headline “The Rare and Beautiful” exhibition at the Harvard Museum of Natural History, with the grand opening slated for the spring of 2020.