An artisanal miner in Tanzania struck it rich last week when he sold two enormous tanzanite crystals for $3.4 million. 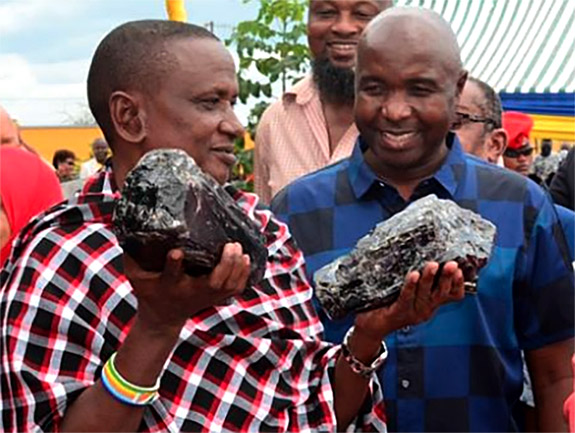 Saniniu Laizer had discovered the crystals — one weighing 9.2kg (46,000 carats) and the other 5.8kg (29,000 carats) — in Tanzania’s Manyara region, not far from the country’s Merelani mining site.

The two rough gems are believed to be the largest tanzanites ever found in Tanzania. The previous record holder weighed 3.3kg.

In a highly promoted ceremony on Wednesday, the 52-year-old Laizer revealed his finds to the international press.

“There will be a big party tomorrow,” he told the BBC.

Laizer also promised to invest his windfall in the local community of Simanjiro.

“I want to build a shopping mall and a school,” he said. “I want to build this school near my home. There are many poor people around here who can’t afford to take their children to school.”

Calling into the celebration by phone, Tanzanian President John Magufuli commented, “This is the benefit of small-scale miners and this proves that Tanzania is rich.”

When Magufuli came into power five years ago, he promised to safeguard the nation’s mining sector and ordered the military to build a wall surrounding a Manyara mining site.

Tanzanite is said to be rarer than diamond by a factor of 1,000 times due the fact that this unique and beautiful variety of the mineral zoisite is mined in only one location on earth. The area measures 2km wide by 4km long and the remaining lifespan of the mine is less than 30 years. Tanzanite’s color is an intoxicating mix of blue and purple, unlike any other gemstone.

Artisanal miners like Laizer are permitted to work outside the confines of the Manyara mining site as long as they carry a government-issued license. In 2019, Tanzania established trading centers to allow these miners — most of whom work by hand — to sell their gems to the government.