In a shining example of how persistence pays off, Kevin Kinard scored a 9.07-carat diamond during a Labor Day visit to Arkansas’s Crater of Diamonds State Park in Murfreesboro. The 33-year-old bank branch manager from Maumelle, Ark., had caught the diamond bug during a second-grade field trip to the park and had returned regularly ever since. For 25 years, his amateur prospecting turned up no diamonds. 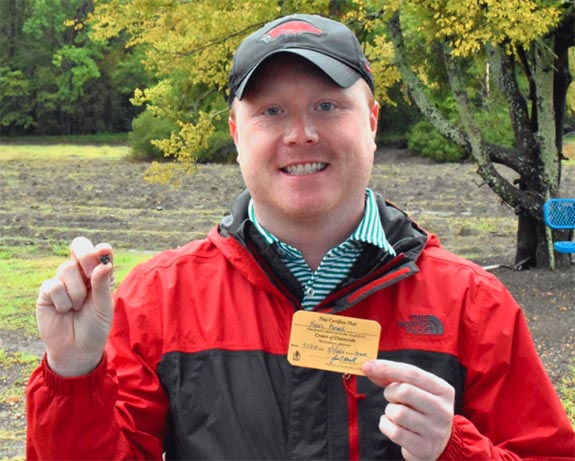 All that changed on September 7 when he picked up a curiously shiny, marble-sized brown crystal in the southeast portion of the park’s 37.5-acre search area. The crystal turned out to be the second-largest diamond discovered in the 48-year history of the park. The largest was the 16.37-carat white Amarillo Starlight, which was unearthed in August of 1975. 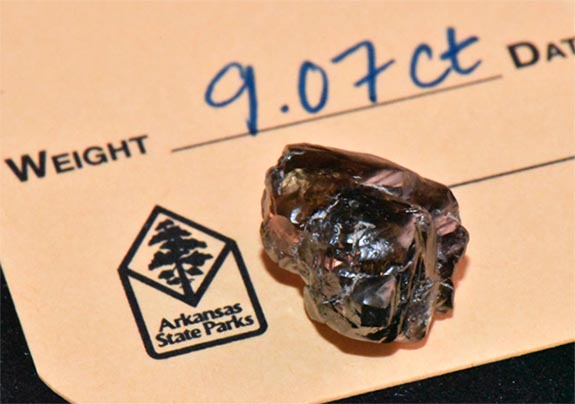 Kinard told park officials that he and his friends were wet sifting for about 10 minutes before he decided to break off from his group to walk up and down the plowed rows of the search field. While scanning the ground, a stone with a rounded, dimpled shape caught his eye.

“It kind of looked interesting and shiny,“ he said, “so I put it in my bag and kept searching. I just thought it might’ve been glass.”

After a few hours, Kinard and his friends headed to the Diamond Discovery Center, where park staffers help identify visitors’ finds.

“I almost didn’t have them check my finds, because I didn’t think I had found anything,“ Kinard said. “My friend had hers checked, though, so I went ahead and had them check mine, too.”

A few minutes later, a park manager invited Kinard into the Discover Center’s office to tell him the big news.

“I honestly teared up when they told me,” he said. “I was in complete shock!” 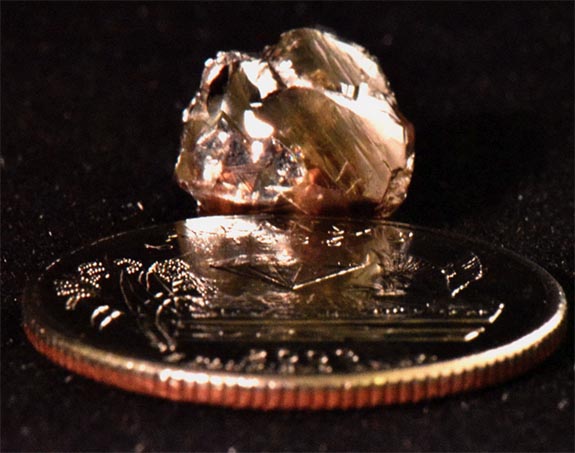 Park officials described the dewdrop-shaped stone as “brandy brown” with a metallic shine, which is typical of all the park’s diamonds.

Park Assistant Superintendent Dru Edmonds noted that conditions in the diamond search area were perfect for Kinard to find his diamond.

“Park staff plowed the search area on August 20, just a few days before Tropical Storm Laura dropped more than two inches of rain in the park,” Edmonds said. “The sun was out when Mr. Kinard visited, and he walked just the right path to notice the sunlight reflecting off his diamond.”

Kinard pointed out the uncanny connection between the diamond’s weight and the day he found it.

As is customary with large diamond finds at the park, Kinard was encouraged to give his diamond a name.

He decided to honor his friends by calling it the ”Kinard Friendship Diamond.”

“We love to travel together and had such a great time out here,” he said. ”It was a very humbling experience.”

The search area is actually a plowed field atop the eroded surface of an extinct, diamond-bearing volcanic pipe. Visitors have found more than 33,000 diamonds since the Crater of Diamonds opened as an Arkansas State Park in 1972.

Amateur miners get to keep what they find at the only diamond site in the world that’s open to the general public. The park had been closed for two months due to COVID-19 health concerns, but reopened on May 22.

Admission to the park’s diamond search area is currently limited to 1,000 tickets per day due to COVID-19 restrictions. Visitors are encouraged to purchase tickets in advance at http://www.CraterofDiamondsStatePark.com, to ensure access.